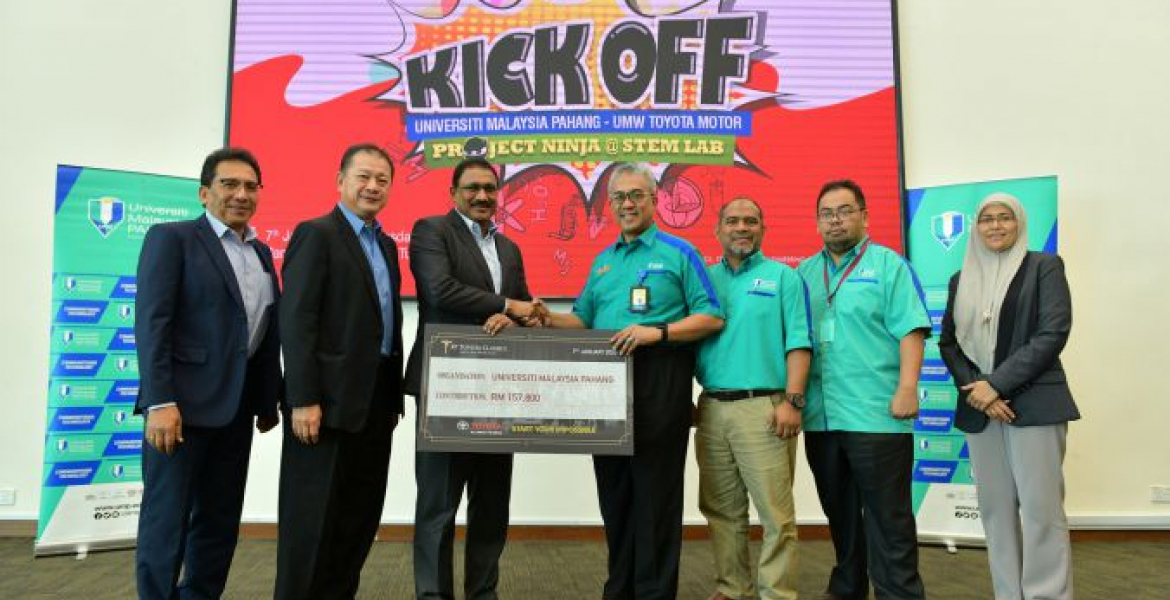 The current rapid development of information and technology requires the students to be knowledgeable and skilful, particularly in areas related to science, technology, engineering and mathematics (STEM), and master the 21st-century skills such as communication, problem-solving and critical and creative thinking.

According to the Deputy Vice-Chancellor (Student Affairs & Alumni), Professor Dato’ Dr. Yuserrie Zainuddin, who is also the Deputy Chairman of UMP Foundation, it is UMP’s priority to help improve the community well being and socioeconomic through education and research, in line with the aspiration of UMP to realise the agenda of communitising technology for the benefits of the local community.

“The collaboration between UMP and UMW Toyota Motor in Ninja  Project@UMP>; STEM lab will attract students interest into STEM, especially in robotics and digital technology.

“It also involves UMP students as facilitators, teachers and lecturers in empowering STEM,” he said in his speech at the Cheque Presentation Ceremony from Toyota Classic UMW Toyota Motor to UMP in conjunction with the kick-off of Ninja  Project@UMP>; STEM Lab at the Banquet Hall, Chancellery, UMP Pekan on 7 January 2019.

“It includes funding for educational and community programmes and provides learning facilities for UMP students.

“By 2025, UMP Foundation targets to support 7,000 UMP students from families in the B40 group and excellent students to pursue their studies in this university,” he said.

Meanwhile, Ravindran said that the collaboration with the Ministry of Education in Eco Youth Program since 2001 involving 2,000 students from 300 schools have been successful in organising environmental awareness programmes.

“Toyota Dream Art Contest which was introduced seven years ago, managed to inspire 9,000 students to share their creative ideas through future car drawings.

“Toyota, as the sponsorship partner, also introduced a new initiative Toyota Outrun in conjunction with Tokyo Olympics and Paralympics 2020, which raised RM150,000, to be donated to Paralympic Council of Malaysia.

“Through the organisation of the Toyota Classic Concert, we managed to raise a total of RM9.4 million from companies and ticket sales since 1990, which has benefited more than 72 organisations related to environmental care and young people of this country.